The Board Resolution to suspend delegations in our Snapshot has been approved 3 votes in favor to 2 votes against (plus a bunch of activist votes): Snapshot

With this approved resolution in place from the PoH Mission Board, we have took action and removed erc20-balance-of-delegation from the Proof of Humanity Snapshot page.

We recommend the community now that it drafts a HIP to decide on this very relevant matter by using its democratic methods.

So far in the debate the following recommendations have emerged:

A HIP around these (or any other method that can be suggested not listed in here) should be drafted, debated and voted following the steps of required Phases in order to get full approval from the DAO.

This is nothing but an attempted coup. The board didn’t have any debate (I only saw the poll which allows everyone to vote).
The board doesn’t have power to change the rules of the vote.

You will repeat the word coup ad-eternum yet that only exposes what you did and projects the psychology behind your actions.

The Board has extensively debated since this broke out yesterday on the different community channels and had 100% of its members voting this resolution, including yourself.

Let’s draft a HIP and allow the DAO decide about delegations.

The Board has extensively debated since this broke out yesterday on the different community channels and had 100% of its members voting this resolution, including yourself.

This is a pure lie, you didn’t even mentioned that to the board.
Screen of board chat for proof. 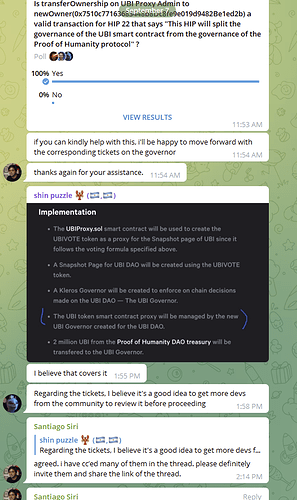 Want me to post the extensive debate I had with yourself yesterday on the chats?

Let’s move forward with a HIP on delegations and vote on it.

The MB holds no authority to remove delegations, so this vote will have no effect. Removing delegations is not a technical implementation of voting, but a political change, so it requires regular HIP procedure.

and other procedures are securely implemented.

The security of the voting process was put at risk by this dubious act of serious questionable ethic.

Delegations also, for those who are relatively new to the DAO, where never actually voted but imposed de facto since the very first day.

The Board has approved this resolution and now the DAO should vote on it. If delegations are approved, they will be reinstated.

Delegations are an UX feature many users rely on. Removing them is a political change. Delegations are everywhere in Snapshot and are a sane default for DAO governance, has been there since the beginning, explicit or not.

Not only are ethics subjective, they are also not technical.

I’m actually in favor of delegations, particularly the idea of quadratic delegations that would mitigate gerrymandering or clientelist attacks.

Removing delegations with a Mission Board vote IS GERRYMANDERING and corrupt. I’m completely sure you would have a different opinion if the onboarding was done by other parties, you even publicly celebrated people that voted on behalf of their families, but prefer to be inflammatory and create drama because your political opponent is involved.

The fundamental problem of making a decision about delegations with delegations activated is that it kinda corrupts the legitimacy of the process entirely with that setting on.

I doubt we would get a similar result since Clement farmed his delegations getting even as much as 23 in a single day.

We should vote on this matter without the setting corrupting the outcome of the vote since we are voting about that very setting.

To give context to this “vote”, Santi has been pissed of that a lot of us (Burmese) registered and gave delegations to someone in particular.

As Yadana said
« This looks like the given reason of Myanmar Military dictator coup on 1st Feb 2021. The voting results wasn’t satisfied enough for their military supportive party while NLD party won over 300 seats at the parliament. As far as I understand, POH is supported by Democracy Earth. We can’t accept the delegation results as the one from opposition parties is gaining. Much more sound like dictators.

Our Myanmar lost our voting over the gun of military dictatorship and now we have been questioned in our delegations again as we are from 3rd world country. »

The coup supporters showed the faces of a lot of our community members, accusing us to be puppets and of not being able to think by ourselves. Stating that since we were from a 3rd world country we should have been victims and influenced. This is patronising, racist and a violation of our honor to be displayed like that labeled as corrupted people.

This is true that initially most people on-boarded are from my hometown Hpa-An, and know Clement or Pone Pone personally, thus are likely to delegate to people that they know even after they were shown a delegation list.

If they had let the things go we would probably get more community members acting as delegates after the people registering extends outside of their direct circles (actually Clement even reached out a few times saying that lot of people delegating to him wouldn’t look good and encouraged to have other people speaking Burmese acting as representatives). But we more focused on onboarding a sufficient amount of users for the community to be able to handle vouching by itself.

They accused us of forcing people to delegate without any proper evidence. Actually we have the a capacity of making our own decisions instead of being used by other people. Said that Burmese people coming to speak in the telegram group was fishy (even though there is a language barrier and we generally don’t use telegram but more often Viber and Facebook) while we are highly educated about democracy. We never expected that as our first experience, especially from a platform giving emphasis to democracy.

But they saw it as a threat to their power and decided that voters had to be suppressed for them to stay in control. No rules were ever broken, Proof Of Humanity is 1 person = 1 vote. There is no tests of any sort (apart maybe being able to follow the rules) and everyone should be equally welcomed and represented not treated as a forced victim.

For me personally, I am tired of drama and FUD now. So, I encourage everyone to think carefully at the situation, I wish for a fork to happen soon and people can choose which version of POH they support. I sincerely hope for people to choose wisely which side they support and stick participating in it, without any drama nor animosity for the other side. Live and let live! Win Win situation for both sides.

This is a very interesting discussion, looking in from the fringes. I would also support a fork at this point. I posted this on the Telegram discussion several weeks ago but it warrants another read as you make your decision on this topic. This article articulates very well the argument for forking a DAO moving forward when the view of its members is as divided as it appears they are here.

A fork that helps the project strategically grow in as many layer 2 as possible would be also a smart move market-wise … deploys of PoH v2 on Polygon and Gnosis, each being a fork under the governance of each side being expressed by our community (UBI and Kleros).