We need to move forward with the approved execution of HIP 22 which specifies two things:

I’ll detail each action on a section each:

Changing the Governor of the UBI ERC20 and the Owner of the Proxy.

In order to do this, we should setup the following ticket:

That ticket should transfer the ownership of the Proxy Contract from the POH DAO to the UBI DAO. This means that it will be the UBI DAO who will have the power in the future to change or upgrade the UBI Smart Contract for a new one (eg. UBI v2)

Then, we must change the Governor of the UBI Smart Contract with the following ticket:

With that ticket in place, the UBI DAO Governor will be the only entity able to modify parameters of the UBI ERC20 Smart Contract itself.

Transferring the holdings in UBI from PoH DAO to the UBI DAO.

According to HIP 22, it states the following:

Thus, requiring the transfer of 2M UBI from PoH DAO to UBI DAO. For this I suggest the following ticket:

This is a highly technical post, so the more eyes we can get on this content, the better and safer this actions shall be. Please provide feedback as much as possible and feel free to ask questions.

I have the following ones and will tag folks that I think it can be helpful for us:

Looking forward to the help, feedback and advise of the community. This is a necessary step to finish the split of UBI DAO from PoH DAO as we have agreed a year ago, and also a necessary step before we upgrade UBI to UBI v2.

Due to the complexity of these actions, we need as much help as possible. Thank you all.

Some members of FORK DAO were checking it right now, and explaining how it works. Fantastic. 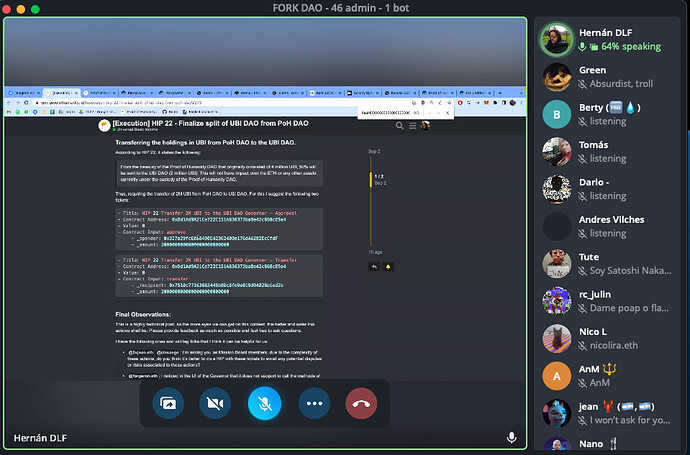 Thus, requiring the transfer of 2M UBI from PoH DAO to UBI DAO. For this I suggest the following two tickets:

You won’t need the approve there, those are only for transferFrom calls. Just do the regular transfer.

You won’t need the approve there, those are only for transferFrom calls. Just do the regular transfer.

Yes, we were trying to learn and check this out. The first ticket (transferOwnership) is easy because of the UI. Address is OK.

We have some doubts about the proxy as well. Is it okay to call directly on the proxy

It would be great if we can reach out to some of the folks of Open Zeppelin regarding this. I will try to ping Santiago Palladino and Ethernaut among others and check with them if we are taking the right steps.

Update: I posted on the Open Zeppeling forum in order to get their assistance regarding the transfer of the ownership of the proxy contract.

I confirm that I get the following bytecode on the changeGovernor function:

Regarding the second ticket that does a transfer of 2M UBI from PoH DAO to the UBI DAO, I get the following bytecode:

Can you double check this @herniadlf on your end?

We are definitely sure that the Governor will execute the proxy functions properly on the Governor contract using the bytecode option @forgeron.eth @fnanni @clesaege ?

Thanks all for your help.

Update: I posted on the Open Zeppeling forum in order to get their assistance regarding the transfer of the ownership of the proxy contract.

With the transferOwnership call I see no problem. In fact, the kleros governor UI let you select that function. My doubts are with the changeGovernor over the UBI Proxy (0xDd1Ad9A21Ce722C151A836373baBe42c868cE9a4) because the AdminUpgradeabilityProxy doesn’t have the function definition. It will delegate the call to the implementation (afaik it is 0x45574741ce337505359cca0d80fa810f49158793).

Meanwhile we have a confirmation, I will try to reproduce the execution. I’ll make a mainnet fork with hardhat and execute the transactions manually. I let you know if i can get it done.

It works fine. I uploaded all the files needed to reproduce it here . Hope it helps!

This is so awesomely extraordinarily useful I don’t know where to begin to thank you for taking the time to do it. Definitely removes many existential doubts when setting up the tickets.

From what I see on the code you executed this ticket which changes the governor on the UBI contract:

My main doubt though has to do with this action:

Where you able to test that one?

The output is here

Then, the real case is a submission with the three transactions together. When I want to make it in testHip22.js script, I was getting the error “The transactions are in incorrect order” because of a validation in KlerosGovernor.sol. I found that it only works if the order of the submission is: (1) changeGovernor (2) transfer funds (3) transferOwnership . Idk if the Kleros Governor UI get the transactions in order for you, or if you have to add in the right order. @forgeron.eth @fnanni would you confirm this?

Sorry 4 flooding, but after doing the nerdy stuff, I went to check the original HIP specification. I’ve talked to @santisiri because the ubi transferOwnership is not 100% explicit imo. The original HIP talks about:

But the ownership of UBI wasn’t specified. I suggest that we create a new HIP just for transferOwnership. Or something like a “patch” for this hip.

What do you think?

But the ownership of UBI wasn’t specified. I suggest that we create a new HIP just for transferOwnership. Or something like a “patch” for this hip. 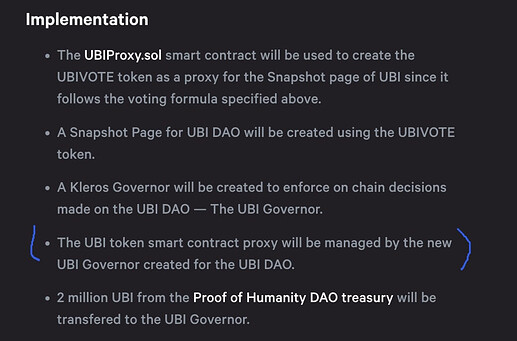 Hey Hernan, I believe this part covers that.

Ooops, my mistake. I was reading the phase-2 linked in the post

You are right, it’s explicit there in the phase-3 post. Thanks Jean!

Hi everyone, I talked with the PoH Board regarding this topic and we issued an approved resolution for the tickets that you can find on the Board’s Snapshot page.

We also had an internal debate of the Proxy Admin ticket that transfers ownership and we have all agreed: 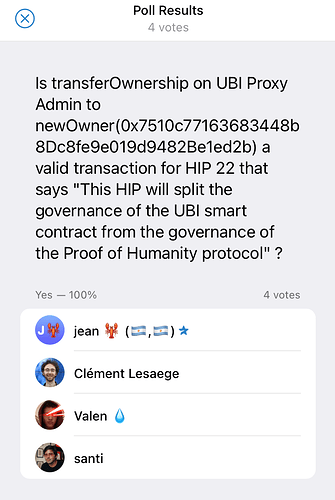 With this in place I think we should be okay to advance with the 3 tickets on the governor.