PoH provides a sybil-resistant list of humans and their associated wallet addresses. Integration with projects like Gitcoin shows how PoH can be a cornerstone for other dapps which require protections from sybil attacks. However, as real world identities are linked to each address in the registry, several concerns have emerged from the community:

In addition, once these profiles have been linked to multiple dapps, other concerns like disclosure of personal finances & blockchain activities to family, friends & nation might emerge.

In the form of an identity mixer, a privacy infrastructure can be built to allow some PoH users to partake in activities anonymously.

A separate “list of humans” can be created, alongside the current registry. Users from the existing PoH registry will be able to insert a new address into the anonymous registry to prevent the association from the anonymous list to the public list. Zero-knowledge proof technology will be used to ensure that:

The effect is that external contracts will be able to verify that an address belongs to the PoH list without knowing exactly which human is it. This is a non-interactive approach where external platforms do not need users to generate unique proofs for each activity/transaction.

What Does This Mean?

For Developers Building on PoH 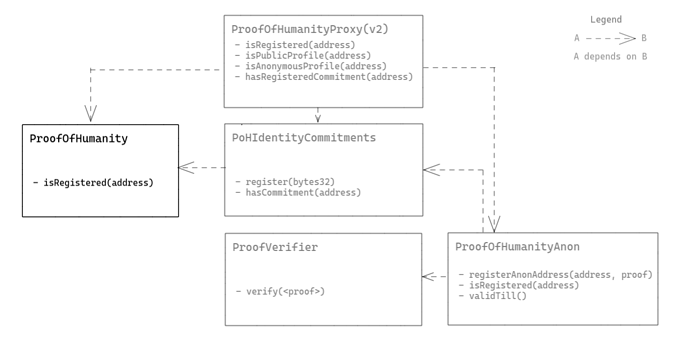 The project will extend the current ProofOfHumanity contract and upgrade the ProofofHumanityProxy contract.

Another contract, ProofVerifier will be deployed to allow any smart contract or even off-chain applications to verify a proof generated by a PoH user.

Another contract, ProofOfHumanityAnon, will be the registry that will accept a proof from any addresses. By checking the proof, it can assert that:

Upon said verification, it will then include the sender’s address to the list of anonymous humans.

With two lists of humans now, the ProofOfHumanityProxy, which powers the Snapshot page currently will need up upgrade. It will read from the 3 smart contracts ProofOfHumanity, PoHIdentityCommitments, and ProofOfHumanityAnonto recreate the sybil-resistant list. The set of humans will now be defined as:

With the proxy token returning 1 upon the above condition being met for a given address for the ERC20 method of balanceOf(address), PoH users will be able to conduct polls on Snapshot pages anonymously if they have anonymized their address.

For users of PoH who want to link an anonymous address to their identity, they will need to follow a two-step process. This would be part of the PoH frontend tools, possibly at privacy.proofofhumanity.id.

The user experience with Snapshot will remain the same for end users. They will either vote with:

The Margin of Error Discussion

The initial approach to solve this problem will be to reset the anonymous registry every given period, let’s say a year. This means that users will register for the anonymous address once each year and has anonymity set over the entire population.

To further reduce error rate Clement suggested a sliding window logic over a period of 1 year, composing of 4 internal sub-trees, each corresponding to a quarter of a year. This means that users will register on the identity commitment contract that corresponds to when their profile expires. This means that users will register for the anonymous address once each year and has anonymity set over approximately a quarter of the population.

Another approach, adding on to #1, is to allow users to only re-register the public profile with the same address. If users want to re-register with a different address (maybe due to loss of keys), it will be treated as an exception and is dealt with in the Kleros court. This prevents cases where users can have multiple anonymous addresses when they have a profile that was linked to more than one account at a single time period.

Computation of zk-SNARK proofs takes significant computation resources during the generation but is fast to verify, which makes it suitable for on-chain verification. Many browsers do not have the necessary call-stack depth to allow for the proof generation. From initial testing, Firefox browser is the only browser that is capable of doing it. The custodian proof generation is a service to be hosted by PoH to allow users to submit both the identity commitment secret and additional parameters to have the proof computed on the server side.

The most expensive cost is on-chain proof verification, used when inserting the anonymous address into the list. The ballpark is 325k gas. At 50 Gwei, that will translate to 0.01625ETH or $42 (current rate)

This consultancy engagement grants PoH the license to use the identity mixer perpetually.

[Links are removed from below article due to account restriction on discourse, you may look them up on a hosted version]

Some images and links are removed on the post due to my account level on discourse, the full draft is made available here

The above proposal is the 3rd draft of the privacy idea that has been submitted to @clesaege team and we have reached a standstill. The drafts prior suggested the scope and delivery which the team could not agree on and have not shown interest in continuing the discussion. So I’m leaving the proposal here if anyone would like to pick it up from where it’s left.

Feel free to partake in the discussion to improve this proposal if you want to build privacy onto PoH. Some of the issues that we might want to address prior to deciding if we should build this layer is:

Very interesting that it’s stalled. Obviously not a high enough priority ATM? Would a half way house solution be to just hide the identifying photo/video in some way? It’s not total privacy but maybe psychologically it’s enough for now?

This sounds really interesting. I would like to see this idea develop further. Unfortunately recent issues regarding exposure of personal information were disregarded as priority so I do not thing that this would be implemented in the near future, unless more manpower is brought to the system.

Agreed. I think the governance / ownership issues are dominating discussion and attention at the moment.