The user, when onboarding, should be able to decide either to make a visual or verbal confirmation (or both) of their public address during their video.

The current rules for profile submission require a mandatory sign (can be a screen) showing the full Ethereum address. This has been a point of failure for many people. Although many efforts where made to help resolve those problems, such as HIP-27 allowing for one character mistakes, the sign itself is just one more step to fight deep-fakes.
Considering all those facts, we believe that it’s feasible to replace that sign with a verbal confirmation. Instead of showing a sign with the ETH address the submitter would have to say out loud 8 words that confirm ownership of both address and media files.

The advantages are clear:

Changes to the primary document

Modify section 4 of the primary document to the following:

The user must look at the camera and say (in one of the officially accepted languages):
"I certify that I am a real human and that I am not already registered in this registry. My confirmation phrase is "

Following by an identifier which is obtained by converting the hexadecimal Ethereum address into base 2048, then converting those digits into the official BIP-039 dictionary words. The user then must speak the first 8 resulting words.

The phrase derived from the address would be generated automatically in the DAPP UI. Also it would be shown on every profile that chose this verification method, so that validators can still curate the list as usual. Both options can be seen in the Demo below. 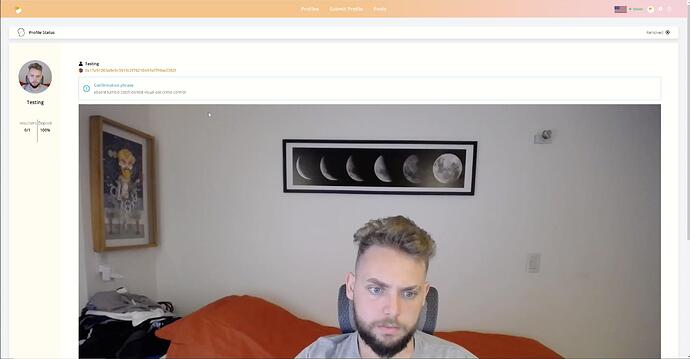 In general i support this idea, but my only concern is having people read out BIP words from their address. People are already confused about sharing seed phrases and pub/priv keys, and having someone read out something that sounds like a seed phrase could make them worried about what they are sharing, or give them bad practice that it is ok to share a list of words relating to their address. That said I don’t really have a suggestion of an alternative that removes that concern, just wary of introducing confusion to already confusing security practices. Thoughts? (also sorry if this point has already been discussed, did a quick skim of past threads).