Hello humans, as you know, the UBI v2 development has been taking a couplke of big steps, and now we are ready to start some testing. Testing phase is critical to find issues. We need as mach people testing and validating as possible to ensure that everything works as expected. Anyone with at least a small degree of understanding of how contracts, transactions, NFTs, and tokens work, can help on this test. Even if you know nothing, you can still read this post and ask what you don’t understand. You will deffinitelly end learning.

I have deployed a version of the UBIv2 contract on Kovan. I picked Kovan mainly because I can verify the contract and allow etherscan to build the UI to interact with it. Was hoping to do it on Kiln, but thjere is not Contract Verification or UI in there.

NOTE: To convert a date to its UNIX timestamp representation you can use this tool. Enter the date and click on “Human date to Timestamp”

That’s all for prerequisites.

Most of the next steps will require you to interact with the UBIv2 contract for enabling UBI accrual, and delegating.

Before being able to delegate your UBI, you need to start receiving test UBI. To do so, navigate to the Write Contract section on UBIv2 on etherscan and execute the function startAccruing passing the address you used to register on the POH Dummy on pre-requisites 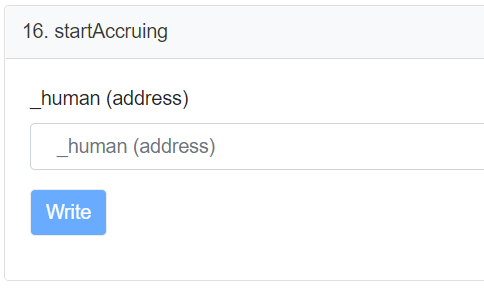 Once you arte receiving your UBI, you can start testing delegations. There are 2 delegation implementations:

On this guid I will explain how to delegate using Flow only, because its the easiest. Stream UBI requires some extra parameters to be passed as encoded data. For that it would be much easier to have a custom UI.

To delegate your UBI to another account, execute the createDelegation function and pass it the following parameters 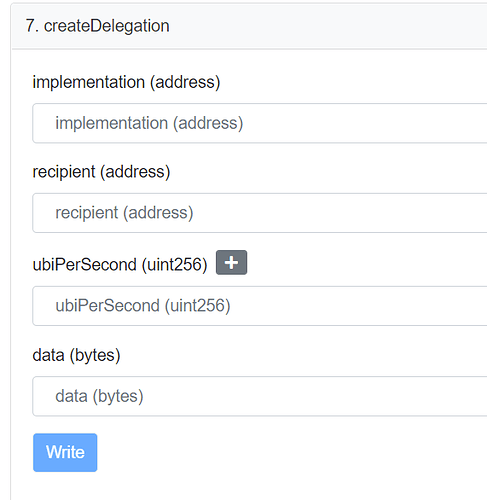 Click on Write. Once your transaction is completed, the recipient will receive an NFT that represents the Delegation, and should start receiving the UBI that you deletaged.

You can inspect the delegation NFTs on this URLs:

The previous steps allowed you to delegate UBI. Thats the asiest part. The complex part comes to actually testing the behaviour. In order to correctly test delegations we need to move a lot of stuff around, and mess a little bit with the contract.Following are some tests that you need to execute and validate: 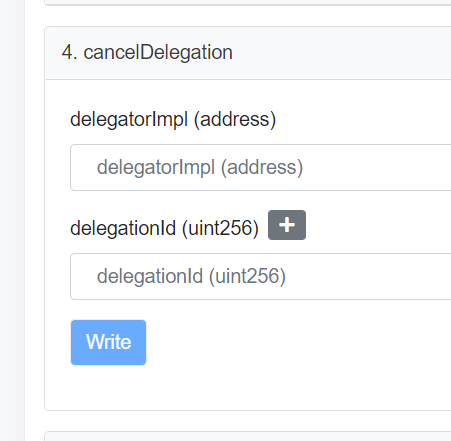 If you find any problems while testing, please, open an Issue on the UBI repository givins AS MUCH INFORMATION AS POSSIBLE on how to reproduce the issue.
This means, step by step what you did, and how you got to the issue.
Also attaching screenshots can help.

Thats all for now.
Feel free to contact me to any of my channels if you have any questions.

So far, so good. Was able to complete all steps above.

Now will test a bit…

Awesome! Let me know if you have any doubts or questions! 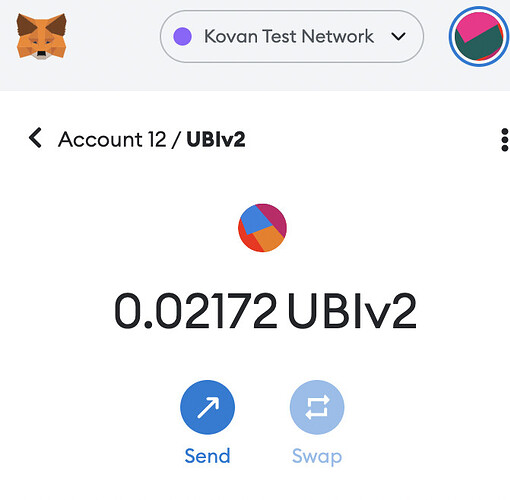 The delegation is an NFT.
If you have access to that wallet, just add the contract to the wallet on the nfts section.

Adding this Address should be enough. Maybe the token ID. Check the transactions on etherscan

Everything went OK, I did everything, delegated 100%, then deleted that (It was a little tricky to find the NFT #) and made another delegation to 50% to another address, sent UBI back and forth… deleted the last delegation… If I could do this… following the instructions, everyone can. Looks good Juanu!!

Already testing it! let see how to use it and what can we do with!

@juanu How do i confirm from the delegated wallet, how much ubi is flowing in the NFT?

Flowing goes to the holder of the NFT, so you can just check the UBI balanceOf of the wallet you delegated.

An updated version is aout to come (with the help of @ludovico ) but for the sace of speed, basically:

BalanceOF is giving you the amount of UBI at the time you query, right? so if you want to know the flowing amount (UBI per secod) you need to check twice in different moments to caclulate the UBI rate, am I correct?

You need to know the id of the Flow, and call the function getFlow passing it the Flow ID,

This will return all the parameters of the flow. ratePerSecond will tell you how much UBI per second that flow is delegating 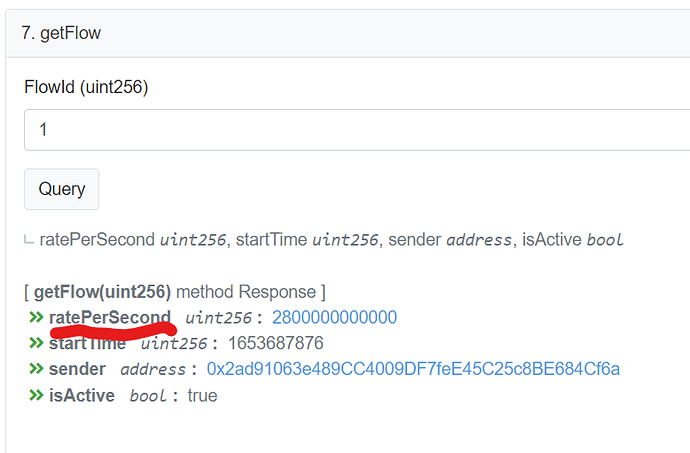 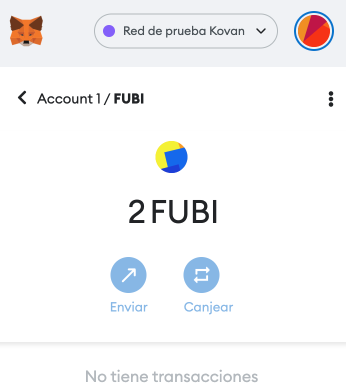