The following profiles where created in Proof of Humanity have instantaneously delegated voting power to @clesaege in spite of having 0 activity with either the protocol or even ethereum itself. This list only shows the accounts created in the last 24 hours alone but the list is considerably longer.

This is clearly abusive behaviour coming from a Mission Board member of this community that requires proper legislation. I open this thread in order to hear the voices of our community with regards to the actions of @clesaege.

We need to stop this 1h1v, lets change the voting method

The application of quadratic delegations would alleviate the problem and would encourage more members to seek delegations.

I like this approach. Quadratic delegations could be a good way to go forward.

Please stop trying to FUD on everything (last time they were FUDing on the mother of my partner delegating to me https://twitter.com/LudovikoPoh/status/1566585653453799426).

I’ve been helping to bootsrap a Burmese community and for sure initially a lot of people would know me (and delegate to me as I may be one of the only delegate they know). I’d expect this to change as the community expends.

Also I don’t have a plan to get a crazy amount of delegates (it’d be better to have a multiplicity of community leaders instead of a polarisation between me and Santi).
When asking people to delegate, I’ve previously suggested other people and pointed out I had too much delegations see this Tweet.

So Santi, if you are “jealous” of Burmese people delegating to me, maybe try translate your delegation speech in Bamar and help them get vouches. That would probably make you more popular than attacking them…

Farming is registering sockpupets accounts (asking people to make videos and keeping control of their addresses). If you believe any of those profiles were “farmed”, I’d invite you to challenge them.
I would also support an HIP making it explicit that people have to be in control of their accounts.

I suggest that we move forward with a decision about this that suspends delegations in order to make it.

I have recommended the following action to the Proof of Humanity Mission Board: Snapshot

The board doesn’t have the power to change the voting rules, nor do you have the power to exclude other board members from voting.
At this point this looks like an attempted coup to remove delegations for your side to be in full control over Proof Of Humanity.

(Also farming delegations to your public profile would be stupid, as people can delegate to any address not necessarily a registered one, so if someone where to try to maliciously farm delegations to overthrow governance they would probably delegate to a bunch of anonymous addresses that they control)

Feel free to use the coup narrative, funny projection of your actions. Everyone except those in your payroll can see that you are attacking the DAO. I’m only proposing that we make a decision about delegations without them activated. As democratic as it gets.

That’s an attempt at voter suppression, in current proposals, votes tend to have a 97.5% abstention allowing an active minority to make proposals affecting everyone.
I think we should go to more delegations (show the possibility to delegate in the frontend, have liquid voting where delegations are transitive), not less.

@clesaege is right, all voting to change the voting rules must follow current rules - otherwise, the DAO is not rules-based which is one of the main points. If actual proof of wrongdoing can be produced, then, well then I don’t know what to do.

I would definitely support quadratic voting for a few different reasons.

@clesaege: What do you think of this proposal?

The thing with delegations is that you can’t prevent them (like you can make a simple program voting the way your delegate votes or even give presigned ballots to your delegate and have him submit the one of his choice).

In the last 2 weeks we have seen @clesaege increase his delegations +91% by this exploitative method since his last vote on the DAO: 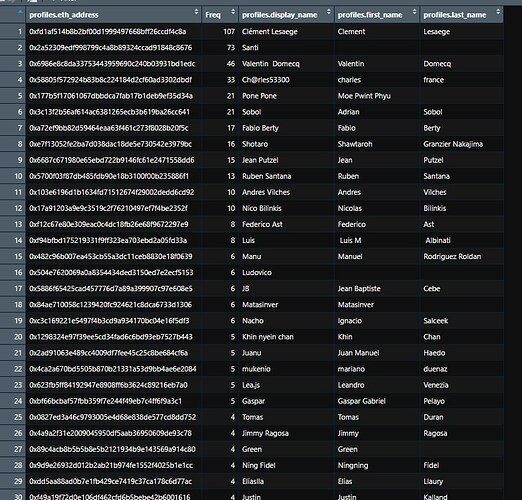 We demand that we get to investigate the users that are giving these delegations in order to understand how aware they are of the methods being used on their behalf.

The Board has the power to oversee the security of the voting process and that is exactly what is being under attack.

The DAO never held a vote about delegations, this is an opportunity to have one –without delegations activated– and see if the DAO agrees with the methods of the Board Member.

The PoH DAO resolution has 2 votes to 1 in favor of this action. According to such resolution @clesaege vote is not valid since he’s the person being implicated here.

I dont approve the name Santi has given. “Farming of delegations”.

But I do show my concern.
The list Is huge and the circunstances are awkward.
Clement’s answer “not all delegations were given to me” does not calm me.

There’s something tricky going on and it suits me horrible. Our governance Is clearly in danger.

The PoH DAO resolution has 2 votes to 1 in favor of this action. According to such resolution @clesaege vote is not valid since he’s the person being implicated here.

Santi, this is stupid, if you followed your logic, I could make a resolution saying your vote is not valid and thus have it passed too. A resolution can’t act on itself before being voted.

The DAO never held a vote about delegations, this is an opportunity to have one –without delegations activated– and see if the DAO agrees with the methods of the Board Member.

There has been delegations from the start the DAO didn’t need to vote the initial state of the project.

Let’s have a HIP on delegations without these being activated. If the DAO agrees, you can move forward with the Burmese revolution. If the DAO requires an alternative legislation on this matter, then we shall work on it.

Simple as that. Let the people who are actually building this community decide.

Let’s have a HIP on delegations without these being activated.

This isn’t according to the rules of the DAO and will not be valid.
This would be an attempted coup and the result would be unlikely to be enforced by the governor (but if you wish to go this road, that’d make a cool Kleros case).

Is this a HIP? What is exactly being proposed here?