As prescribed by HIP-74, proof of humanity is engaged in a peaceful forking process. A transpartisan proposal to approve the constitutions for all POH forks will need to take place.

I open this thread to ideate the constitution for the Proof of Humanity Origin (PoH Origin) fork.

See the initial constitutional HIP here for some background discussion on constitution building. 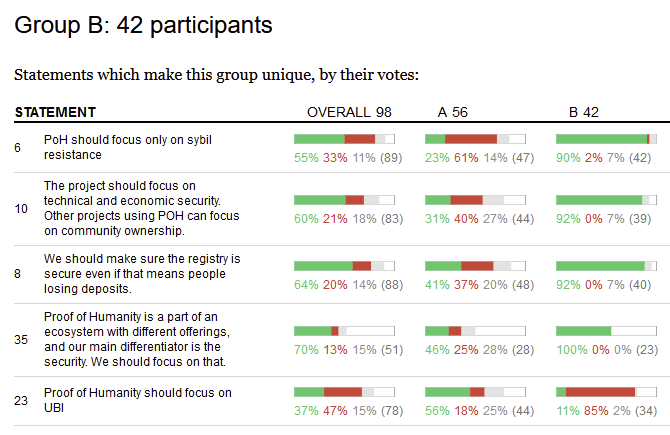 PoH Origin will focus on:

I propose this draft constitution for PoH Origin. Please focus your comments, feedback, and suggestions in this thread.

We, the members of Proof of Humanity Origin, ordain and establish this constitution for our governance for one main purpose:

Promoting and securing a decentralized sybil resistant registry of humans.

All Proof of Humanity Origin proposals, HIPs, must satisfy the following articles, or are otherwise considered void.

1. Proof of Humanity Origin is a Sybil resistant protocol.

A Sybil attack is defined as when an actor has control of multiple accounts registered on Proof of Humanity Origin. All HIPs which clearly and demonstrably break the ability of the protocol to resist sybil attacks are forbidden.

2. Proof of Humanity Origin commits to the principle of equality of access.

Proof of Humanity Origin is an open, permissionless protocol with equal access for all humans making no distinction of gender, sexual orientation, disability, ethnicity, religion, or age.

All registered humans may vote directly, or through their delegate.

4. Proof of Humanity Origin is governed as a constitutional democracy.

In the interests of a consensus amongst a wide plurality of members bound by constitutional democracy, all governance proposals must pass three phases — Consensus Check, Constitution Check, and Final Binding.

HIPs in the consensus check phase must pass a simple ½ majority of cast votes to pass to the constitution check phase.

HIPs in the constitutional check phase must pass an optimistic period as a submission to a Kleros Curate list of constitutional HIPs with a deposit of 4 ETH. If accepted, the HIP is considered constitutional and passes to the final binding phase.

d) In the interests of democratic governance, all HIPs must:

i) allow sufficient time for participation.

All votes must include the choice ‘make no changes’ as the first option so the HIP is vetoable.

iv) not clearly and demonstrably break the decentralized curation process of the Constitutional Check Phase.

Each phase for a constitutional HIP must last no less than 1 month.

Isn’t that too long? Maybe just 2 weeks per phase?
I wouldn’t necessarily hardcode minimum periods per phase. Maybe it makes sense. But, 3 months is ages in crypto land, even if it’s for a constitutional reform, if ~90% of the community is agreeing with it, why delay?

Why punish bribing? In the interest of keeping the constitution robust and small, “nice to haves” should not be in there. Is it absolutely essential to forbid bribing? How will that be enforced?
Think of all the edge cases that can occur just from “banning” bribing. Imagine a small sector of a side starts a bribe, with the sole purpose of tainting that side and make the vote “unconstitutional”. Can you be more specific on this?

That’s without even mentioning I’m not against bribing. It’s not like I would actively encourage it, but still, banning bribing seems excessive to me.

EDIT: I think I get it now. Maybe, just put “not bribe voters with PoHO’s own treasury” ?

Could this be just an optimistic period? I think that’s simpler. Make the constitutional check go through an arbitrable with an optimistic period of 1 week, or whatever. Then, the skin-in-the-game is actual funds, not just being prohibited from taking part in the DAO. That’s also like kicking people out of a DAO composed of humans and I don’t think it’s right either. Just make wrongdoers lose money, that’s way worse. Also, having to create a vote to reinstate these people is going to grow old very fast. Summoning people to vote should be upon important matters.

It’s not preventing these treasonous humans from registering in POH, they are still in the DAO with voting rights, just no proposing rights.

vi) addresses the Paradox of Tolerance

This section of the constitution draft is similar to section 3 of the 14th Amendment of the US constitution which prohibits those who had “engaged in insurrection or rebellion against the same [United States], or given aid or comfort to the enemies thereof” from serving in the government.

Banning Trump after Jan 6 is entirely compatible with the foundations of democracy, even necessary. By the Gödel-Popper rule, a democracy should never give its tools to those who want to thwart it.

Such a rule would also have prevented Hitler’s rise to power after his failed coup attempt in the Beer Hall Putsch.

The idea is to prevent attackers who actively try to break the protocol from governing the protocol in the future.

Isn’t that too long? Maybe just 2 weeks per phase?

Yes constitutional changes should be take time. Regular HIPs can speed through with 1 week per phase. I’d be glad to hear what other people think about appropriate phase durationa for constitutional and normal HIPs.

punishing bribing avoids the treasury attacks like the Democratic Heroes HIP where everyone who votes ‘accept changes’ will receive a portion of the treasury.

The constitutional ban on bribing is enforceable on HIPs. The constitution doesn’t have much effect on 3rd party bribing, such as someone paying people to vote out of their own pocket. This is an enforcement problem.

HIPs in the constitutional check phase must pass an optimistic period as a submission to a Kleros Curate list of constitutional HIPs with a deposit of 4 ETH. If accepted, the HIP is considered constitutional and passes to the final binding phase.

Have you guys thought about malicious actors trying to bursting in the protocol in order to damage it? And possible solutions to that kind of problem.
Those who are in the protocol pre-fork will have the chance to vote in the two sides of the fork (at least until they have to renew their profile) or will be a mechanism that forbids you to vote in forkA if you already voted in forkB?

A democracy cannot be allowed to vote itself into a dictatorship. For example, a constitutional amendment which sets the constitutional Curate list deposits to zero would violate Article 4.d.iv

iv) not clearly and demonstrably break the decentralized curation process of the Constitutional Check Phase.

Another example, a constitutional amendment HIP which attempts to remove Article 4.d.v from the constitution

would be valid. However if the HIP also states ‘everyone who votes yes on this HIP will recieve 0.005 ETH from the treasury’, then the HIP would be considered unconstitutional and would never pass the amendment process.

Do you think there are ways to make the constitution more clear? Perhaps we have enough consensus that Articles 1-3 can never be amended. And perhaps Article 4.d.ii, Article 4.d.iii, Article 4.d.iv are considered immutable, where other sections could be mutable in principle.

Pre-fork there was no constitutional protection for governance.

The idea is the constitution can help protect the democracy from voting itself into tyranny.

2. Proof of Humanity Origin commits to the principle of equality of access.

Proof of Humanity Origin will not discriminate voters.

So yes that’s right, everyone, even if they pursue other forks, will remain in Proof of Humanity Origin with voting rights. @Andrei can you comment?

The difference are constitutional protections.

And regarding the un-civic behavior on social media platforms, primarily Telegram, I am working on a content moderation bot to enable decentralized curation and reporting of conduct which breaks the PoH code of conduct, to hopefully encourage more civic behavior and limit toxicity.

More over for governance telegram groups, we can gate entry to PoH members only

All registered humans may vote directly, or through their delegate.

Upon reflection, this article may be interpreted too narrowly. I think this could be modified as

Each human has one vote. The DAO cannot purposely make it harder for people to vote or delegate.The DAO can delegate some of its power to other mechanisms (ex: group of elected people, workers, other DAOs, quadratic voting) but those delegations can always be revoked through a “1 person 1 vote with delegations” vote.

This clarification allows other voting mechanisms, but ultimately a 1 person 1 vote with delegations can revoke any power delegate by the DAO (a mission board, a special quadratic funding season for POH DAO tooling, etc.)

This language can also be updated requiring the authors of an HIP and not just the submitter of the proposal to the constitution check phase (could be different entities) must all be members of Proof of Humanity Origin. And perhaps a regular HIP suffices to reinstate proposing ability. The article would be modified as,

vi) be authored and submitted for constitution check by members of Proof of Humanity Origin.